skip to main | skip to sidebar


Can you imagine the stress involved in winning a world title when it comes down to the wire, the final event of the season at Pipeline needing a score of 9.5 to win in the dying seconds of the heat or its another wasted year?  This film clip from Mysurf tv beautifully captures the poignant moments surrounding Mick Fanning, his family and team as he waits and chooses the crucial wave of an approaching set.
The Old Farts Surf Co. has already anointed 11 time world champion, Kelly Slater, with oldfartsurfer status after his 11th title win (although he's old enough to qualify on age alone). However, according to Old Farts Surf Co. Head Honcho, The Mexican, "Mick's last gasp effort for the 2013 world title and, in the process, turning his whole team grey on the beach is clear justification for honouring him with the internationally coveted oldfartsurfer status."  Congratulations Mick!
Click here to view the video.

The Oldfartsurfer has just realised that he hasn't made a post for the faithful and avid readers of this blog since October 2013.  Excuses could be made and disputed, however, there are no excuses, just a distinct lack of motivation.  In a concerted effort to remedy the problem, Old Fart Surf Co. Head Honcho, The Mexican, has launched a detailed investigation into the source this lack of motivation.  "I left no stone unturned in my self examination in search of the truth" said the Mex. Thankfully, the oldfartsurfer had a breakthrough this morning.  According to the Mex "I was drinking coffee and reading all the important news in the comic section of the local paper after an early morning session on Sammy the SUP  when I came across this Kedulka comic that explained it all"

(In-surf pizza delivery)
"I'm obviously suffering pizza deprivation" said Mex.  "Its pizza that fuels the creative surfing juices, so from now on, whenever we feel motivation downswing in the Old Farts Surf Co. creative department, I'm going to fuel them up on pizza, go surfing and share the love"
The Oldfartsurfer suggests that if you haven't heard from us for a while, instead of writing to the editor, just get a pizza delivered to us.  We prefer a spicy Mexican with hot salami, capsicum, jalapenos, olives and mushrooms on a thin crust.
Please share comments below.

Posted by Oldfartsurfer at 11:57 AM No comments:

In a spiritual pilgrimage to the Vat(ican), Old Farts Surf Co (OFSC). Spirit(ual) Director and Head Honcho of Heartwood Malt Whiskey Pty Ltd (makers of the world's best Whisky), Tim Duckett, secured what no other surf company has ever secured before -  the Papal Blessing. 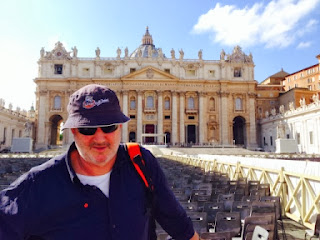 (OFSC Bucket Hat Tim wore to PB's house in the Vat(ican))
According to OFSC Head Honcho, The Mexican, "we got the news late yesterday and oldfartsurfers around the world are rejoicing with their favourite Heartwood release and getting Velvet Hammered".  To mark this special event Heartwood have Unchained and Released Convicts.

According master distiller Tim "it was pretty simple really, I just rocked up and had a bit of a chat with Bene (or PB as I call him) and let him know I'd released the Vat(ican) out of Hell, he was pretty keen on getting his hands on bottle no. 666 of Release the Beast, but we didn't go that far so in true papal style he settled on the Convict Redemption". 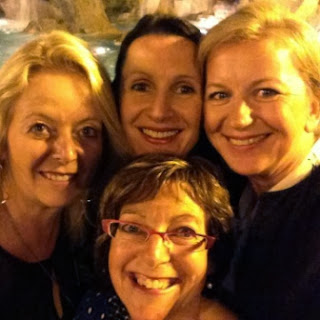 (Four leaf coven picked in Ireland)
The Mex said "there was a rumour the four leaf coven our distiller picked up on the preceding spirit(ual) tour Ireland may have had some influence on PB's decision, but he was Pretty Mums on this.  As they say, what happens on tour .."

Posted by Oldfartsurfer at 7:47 PM No comments:

Oldfartsurfers The Dude (OFSC No. 12) and the Old Farts Surf Co. Head Honcho, The Mexican (OFSC NO. 4) were lured by a web cam and surf reports to a favorite beach break.  "Awesome" said the Dude when he got the first glimpse of a 4' set as they arrived.  "Yeah, awesome" responded the Mexican, the longest verbal conversation the pair had had during the 40 min drive.   During a quick surf check from the car park the Mexican snapped off this sequence of a cripple on a long clean left.  No further words needed, it was time to rubber up and get out there and snag a few. 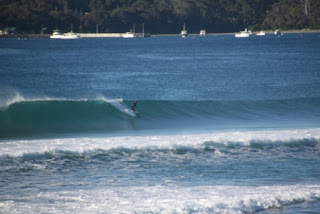 Whilst the photos show blue sky and blue water, being mid winter, the oldfartsurfers had a lot of rubber to put on.  As they rubbered up the friendly cripple came up from the beach, introduced himself as Pete, and gave some friendly advice on where the best peaks were.  He then peeled back his rubber hood showed the boys a wound on his forehead where it had been driven into the sand bottom.  Whilst seeing Pete's bloody wound was a sobering reminder of the perils of being sucked into shore break barrel, surprisingly Pete said "the water's really warm".
"The water doesn't seem to warm to me" said the Dude as they paddled out.  "Warm water in the middle of winter, must be the bang on the head made him go troppo" said Mex.  More conversation than a baby shower. 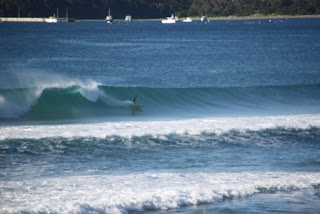 Perhaps feeling guilty about what he had done to Pete's forehead, or, perhaps to protect a couple of oldfartsurfers from themselves, Huey decided to pull up stumps.  All the The Dude and The Mex got was a couple of fat takeoffs then a long wait out the back for the waves that never came.  Eventually, a couple of nods was all that was needed for the oldfartsurfers to agree it was time to paddle in. 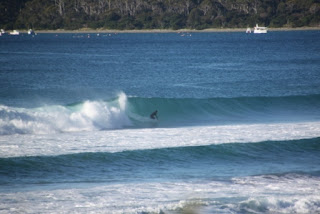 The next day Mex received a message from Pete:
"not feeling great today after getting driven into the grey sand yesterday.  Serve myself right for not pulling out.  Luckily my neck is not too bad.  The blow was more of a brutal shove than a bang... good thing my neck has flexibility or I'd be in a brace.  Says a lot for palates.  The wetsuit hat saved my skin from being torn, but I have a neatly shaven bald patch and some nice bruising. " 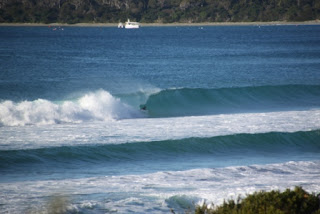 "Pulling out of a wave like that is not an option" said Mex, not even for an oldfartsurfer who could use age as an excuse to avoid a pounding."  "You would live with regrets for the rest of your life, Pete had no choice but to go for it."
(Publishers note: Pete may not have gone troppo after all, the water temperature was reported to be a tropical 13.7 degC, much higher than the 1981-2005 mean of 12.5 for this time of year.)
Please leave comments below.
Click here to see a previous related story.
Posted by Oldfartsurfer at 3:11 PM No comments:

A little birdie told me 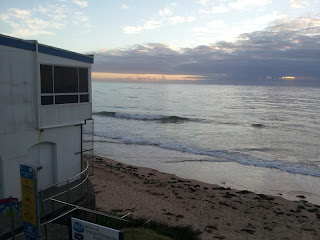 (The uninspiring Entrance)
Intrepid oldfartsurfer no. 45, Rouge, is winning the Old Farts Surf co. 2013 awards for the most surfs in 2013 by an oldfartsurfer.  "Not only is he our most prolific surfer but he is also our major contributor with a never ending account of his heroic oldfartsurfcapades" said Old Farts Surf Co. Head Honcho, The Mexican.  The Dude, Macho and the Mex have had trouble finding any sort of wave to surf over the past two months and have taken to mountain bike riding in a desperate attempted to get a surf stoke. 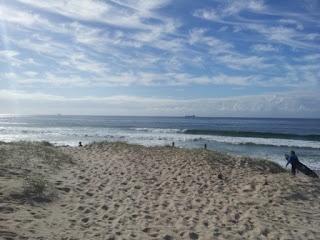 (Out of the way Birdie Beach)
These photos came with the following comments from Rouge:
"The girls left town for their annual weekend away.  My mate Buzzy and I decided to head up the coast (1hr 20min) for some greener pastures.  We surfed The Entrance rivermouth at 7 am.  Very small and uninspiring.  then drove north another half an hour to Birdie Beach (never been there) off the national park just near Budgewoi.  One of those out of the way beaches that we should visit more often.  Beaut little 2-3' lefthanders that got faster and faster as the tide went out.  I'll take you there next time you're in Sydney" 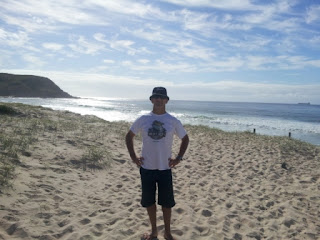 (Oldfartsurfer Rouge at Birdie Beach)
The Mexican said "I was impressed with the Rouge and Buzzy getting to The Entrance by 7 am, the girls were away so they could have slept off the hangover, perhaps they just didn't go to bed after partying all night".  The Oldfartsurfer is Gladdened that Bob continues to excel. 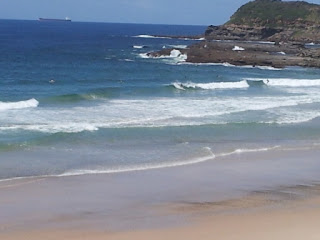 Posted by Oldfartsurfer at 3:19 PM 2 comments:

Pissing down. Massive seas. 8' plus huge out of control.

This report just in from Oldfartsurfer No. 45, Rouge, about a session he had in Sydney yesterday.  The Oldfartsurfer, whilst not averse to to extending the truth in the name of a good story, decided that, in order not to destroy the pure surf stoke essence of the email, it would not be edited.  The following are Rouge's word's verbatim - honest!
"Pissing down.  Massive seas.  8' plus huge out of control.
Photos show dawn check at Palm Beach, then shots as we traveled down the coast looking for a dag.  I finally got a wave near Brownwater, at the boat ramp around the corner from Collaroy.  Never surfed their before.  The Aussie flag on the pole in the water put there by boaties to warn of hidden reef!  Looks better than it was." 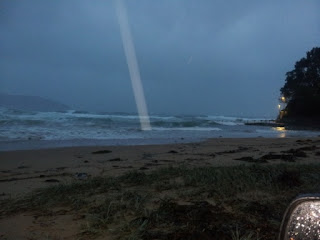 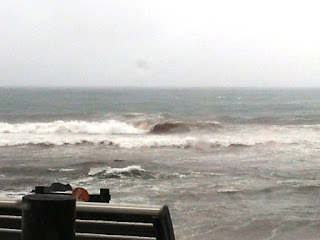 (looks better than it was!) 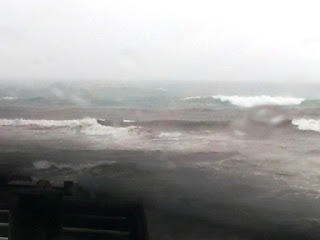 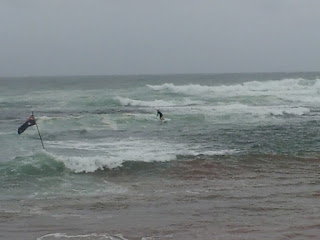 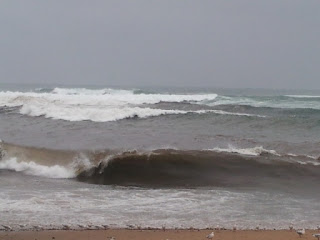 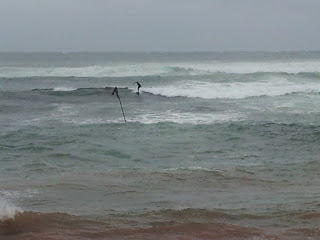 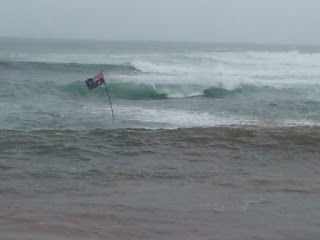 Rouge is to be commended for including a shot of his mates 9'6" McTavish Original.  OFSC Head Honcho, The Mexican said "we are rather partial to a McTavish as many of the OFSC team riders have McTavish Bobsleds.  This 9'6" McTavish Original looks the ducks guts, check out the channels in the middle of the bottom, awesome can't wait to have a crack at on of these beauties." 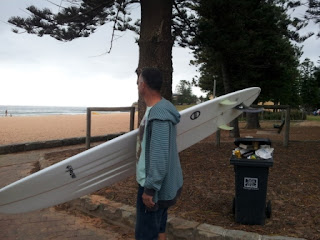 (9'6" McTavish Original)
In spite of the terrible conditions, Rouge is still stoked on his surfing and signed off his communique with "SRC - surf regardless of conditions!".  "Which is exactly what oldfartsurfing is all about" said the Mex.
Please provide your comments in the comments box below.
Click here if you want to send the Oldfartsurfer a message

Posted by Oldfartsurfer at 11:20 AM 2 comments:

Time to turn the page to a new month

Sadly its the end of the month for those who purchased the 2013 Old Farts Surf Co. Calendar.  You'll have to turn the page or live in the past.  No more Mexican (Oldfartsurfer No. 4) at Eaglehawk or Chief Bill to greet you as you get your breakie or settle in to the throne room. 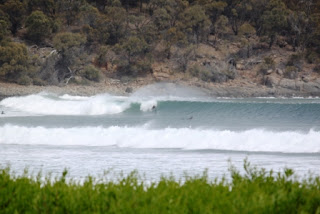 But don't worry, it ain't all bad.  Turn the page to February and you'll find a quiver of new oldfartsurfphoto treats.  Check out the fabled Carlton rivermouth in Tasmania, Australia above, famous for high impact collisions between SUPs and mals. 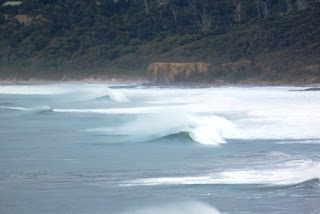 You'll also find a shot of the mystical Eaglehawk absolutely going off.  (Rumour has it that the Mex and the Dude (Oldfartsurfer No. 12) shunned it this day and drove an hour north to surf a break more in line with their oldfartsurfer status - small and fat). 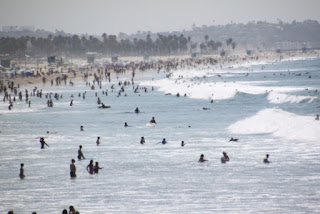 There is a photo the Mex took of a Guinness Book of Records world record team wave, taken from the pier at Santa Monica.  Another below of the famous Venice Beach skate bowl (designed and built by the Mex's new mate Nikolai. at least that's what Nikolai told him over breakfast after his sixth Bloody Mary at Bob Morris' Beach Cafe at Paradise Cove, Malibu).  Both these photos were taken on Mex's recent oldfartsurfresearch tour looking for the northwest surf passage of North America. 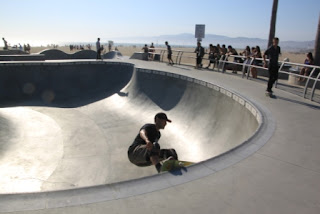 If you look carefully you'll also find Kelly Slater in a Snapper Rocks barrel at a recent Quicksilver Pro, a photo contributed by Oldfartsurfer No. 6, Spot.  A free advertising space on the 2014 Old Farts Surf Co. calender is offered to the first oldfartsurfer to post a comment at the bottom of this blog naming the date the Slater photo is on.

Go ahead, make your day, turn the page.
If you haven't got one already click here to order your 2013 Calender.
Posted by Oldfartsurfer at 9:07 PM 3 comments:

Get stoked on this stuff 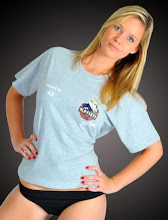 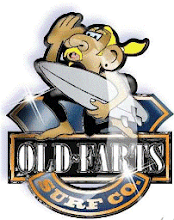